Innovation361 needed a new illustration or graphics design and created a contest on 99designs.

A winner was selected from 30 designs submitted by 13 freelance designers. 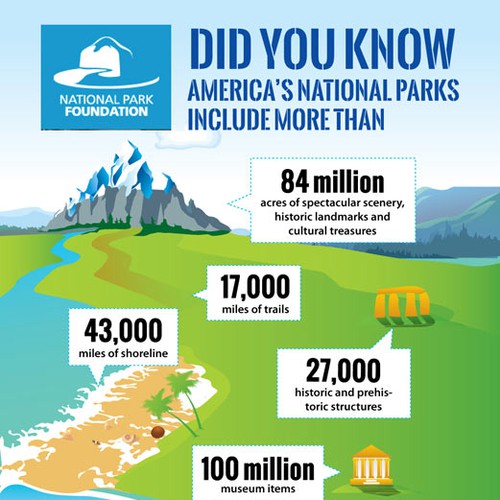 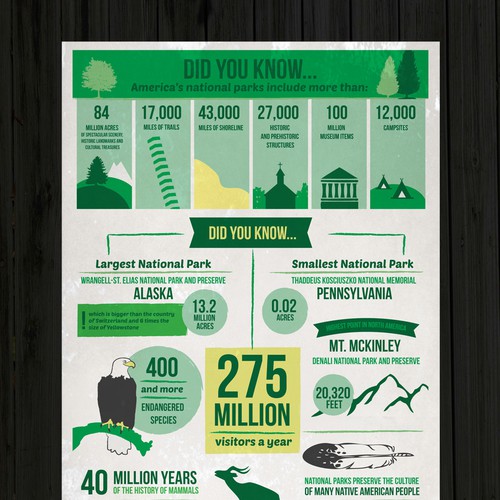 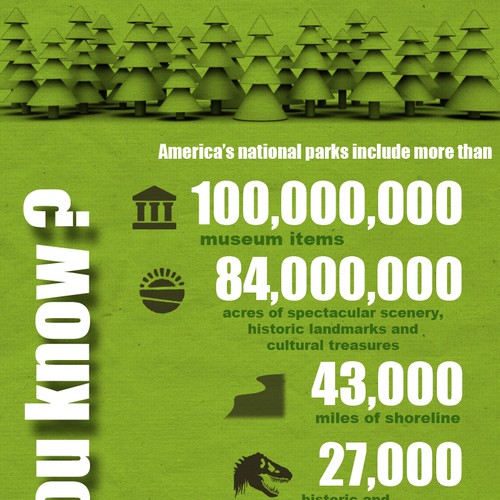 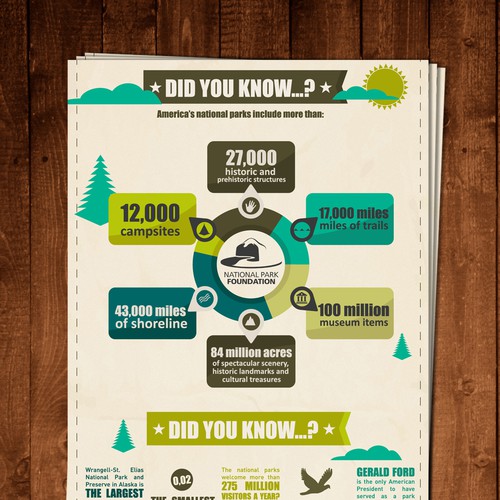 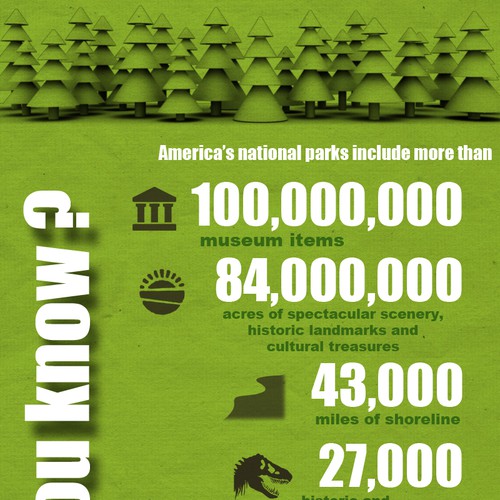 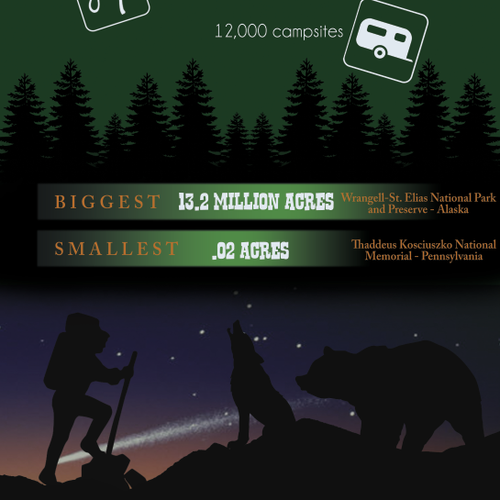 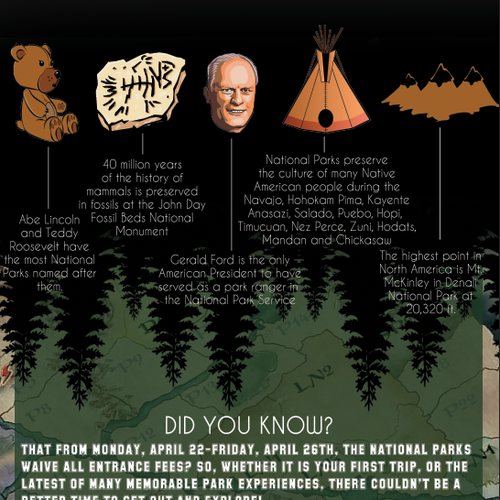 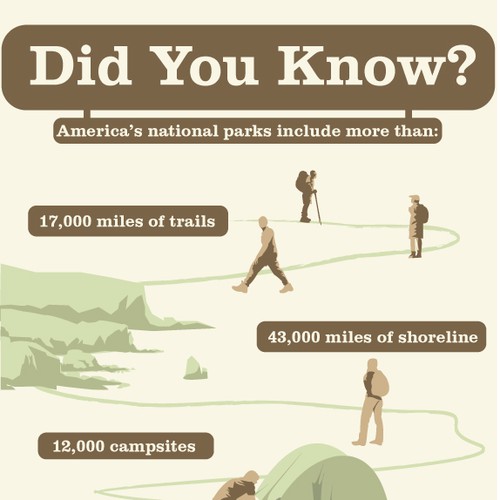 Winner - f-chen
Great work and great person to deal with. Will work with again.
- Anonymous

Finalist - 2bluesky
2bluesky was great! very prompt in updates and great to work with. Did exactly what I thought of in my design brief.
- M.adajar.md

How Innovation361 started their illustration or graphics journey

As the only national charitable partner to the National Park Service, the National Park Foundation directly supports America’s over 400 national parks by pursuing three distinct, yet interdependent, areas of focus – conservation & preservation, education, and community engagement.

We would like to have an infographic designed that promotes National Park Week (http://www.nationalparks.org/national-park-week), which takes place April 20-28, 2013. We have included a number of data points below.

Here are some examples of infographics we really like:

The concept for the infographic is "Did you know...?". Below we have listed the facts we would like to use. You are welcome to use all the facts from parts 1 & 2 but you don't have to. However, please try to use all of the facts from part 3 in summation as these are the calls to action. The goal here is to increase awareness of the National Park Foundatin, National Park Week and to raise awareness of our need for people to make donations and support our national parks:

Did you know America’s national parks include more than:
· 84 million acres of spectacular scenery, historic landmarks and cultural treasures

Did you know…
1. Wrangell-St. Elias National Park and Preserve in Alaska is the largest national park (13.2 million acres, which is bigger than the country of Switzerland and 6 times the size of Yellowstone)?

2. The smallest national park is the Thaddeus Kosciuszko National Memorial in Pennsylvania and only covers 0.02 acres?

3. The national parks welcome more than 275 million visitors a year?

4. National parks are home to more than 400 endangered species.

5. Gerald Ford is the only American President to have served as a park ranger in the National Park Service

6. The highest point in North America is Mt. McKinley in Denali National Park and Preserve at 20,320 feet?

7. The largest living things in the world, Sequoia trees, and the world's largest carnivores, Alaskan brown bears, are found in national parks?

9. Abraham Lincoln and Teddy Roosevelt have the most national park sites named for them?

10. 40 million years of the history of mammals is preserved in fossils at the John Day Fossil Beds National Monument (OR)?

1. Did you know… with 401 parks coast-to-coast, every American is less than 100 miles from a national park experience?

2. Did you know… all entrance fees to national parks are waived from Monday, April 22 through Friday, April 26 for National Park Week

3. Did you know… all of America’s parks belong to YOU? This is your opportunity to learn how you can take an active role in preserving (hyperling "preserving" and send traffic here: https://myaccount.nationalparks.org…rc=NPWpage these special places. Please help us pass along our country’s rich history and beautiful landscapes to the next generation.

Please let us know if you require any additional information to get started. National Park Week starts in less than 2 weeks. We would like to be able to syndicate this infographic as soon as possible in an effort to promote National Park Week. Urgency is of the utmost importance here. Thanks and good luck.

Get started now
Inspirational Illustration for Someday Is Now Global Social Movement
$249
Someday Is Now is a global online community that provides, inspiration, support and resources to help people accompli...
113
entries
43
デザイナー数
Downtown Building Renderings
US$899
We are needing a rendering for a couple buildings for the downtown area. You may consider google mapping Sulphur Spr...
9
entries
2
designers
Create striking campaign image for digital privacy group promoting democracy and cybersecurity!
$ 899
EPIC (the Electronic Privacy Information Center) is a public interest research center in Washington, DC. EPIC was est...
41
entries
15
Designer
Wilmot Gateway Park - Interpretive Sign
$1,399
The City of Woodinville is a small suburban city about 15 miles northeast of Seattle. It is primarily a tourist destinat
63
entries
10
designers
Badge graphic for LGBT training completion
USD 349
SAGE Metro Detroit is a local affiliate of the national Services & Advocacy for GLBT Elders (SAGE), the country’s larg
74
entries
6
designers
Vision 2020 Graphic
$349
We are a church of 2,000 in Tulsa OK. We are targeting our church members and outside donors for a future building proje
106
entries
13
designers
Learn more about illustration or graphics design
See how it works