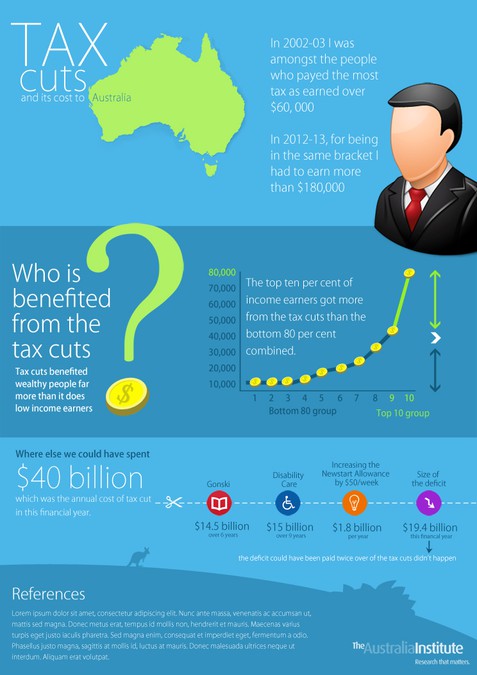 MollyTAI needed a new illustration or graphics design and created a contest on 99designs.

A winner was selected from 8 designs submitted by 3 freelance designers. 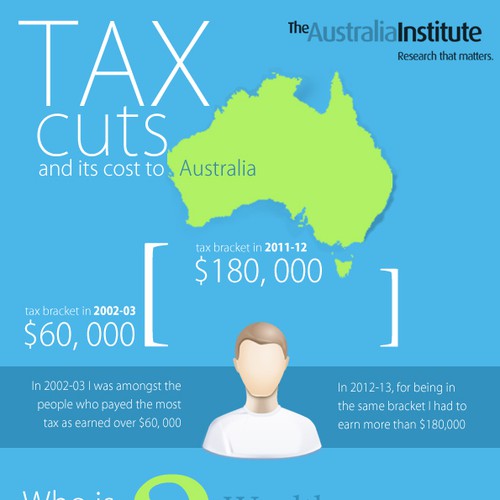 by The Dreamer Designs 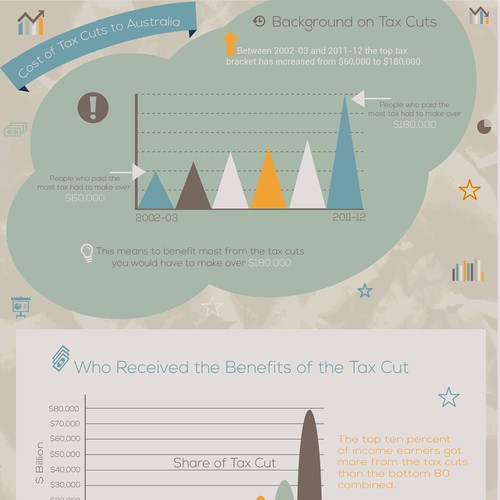 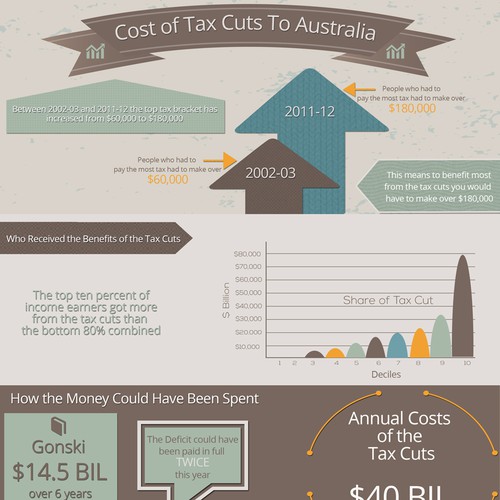 How MollyTAI started their illustration or graphics journey

The Australia Institute is the country’s most influential progressive think tank. Based in Canberra, it conducts research on a broad range of economic, social and environmental issues in order to inform public debate and bring greater accountability to the democratic process.

The aim of this infographic is to illustrate the cost of tax cuts to Australia.
The infographic should be designed as a story that is composed of three parts. I will outline each of the three parts, it is up to you to make them fit together well in the graphic.

Part 2. The next part of the infographic should be about who benefited from the tax cuts.
The Australia Institute has worked out that the tax cuts benefited wealthy people far more than it did low income earners. The actual numbers on who benefited are attached as a separate document. The graph included in the separate document should be used as a basis for what is included in the infographic.

Part 3. The third part of the infographic is looking at how we could have spent the money that went towards the cost of the tax cuts. It will compare the annual cost of the tax cuts to the cost of key policy initiatives in Australia.
The annual cost of the tax cuts was: $40 billion (in this financial year)
Cost of Gonski (education reform): $14.5 billion over 6 years.
Cost of DisabilityCare (a national disability insurance scheme): $15 billion over 9 years.
Cost of increasing the Newstart Allowance by $50/week (an unemployment benefit): $1.8 billion/year.
Size of the deficit: $19.4 billion this financial year (the deficit is a big concern for a lot of people so it would be good to point out that the deficit could have been paid twice over of the tax cuts didn’t happen)
To see examples of past infographics that the Australia Institute has done see our tumblr page:
http://australiainstitute.tumblr.com/

This infographic needs to be finalised and handed over by next Wednesday the 12th of June. This allows 10 days for the entire competition. Could people please submit a design only if they can work within this time frame. Thanks.